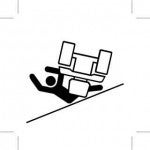 I'm sure you've seen it while driving around. A crash where a vehicle is on its side or on its hood. NHTA reported that rollover accidents have a higher death rate than other types of car crashes. Death happens when an occupant is ejected or some part of the vehicle's cab fails and the structure comes into the passenger compartment of the car or truck.

What is a rollover accident?

Most rollover accidents happen when something happens, like another car coming into the lane of traffic and cutting the driver off, and the driver overcorrects, causing the vehicle to lose control and eventually roll-over. Generally, the higher the center gravity of the vehicle, the greater chance of roll-over.

Rollover crashes have a variety of causes. One of the biggest causes of a roll-over wreck is the type of vehicle that you drive. The taller the vehicle, the higher the center of gravity, the higher the chance of rollover. Vehicles known to rollover are SUVs, Vans, and some pick-up trucks. The more people in the vehicle, the greater the risk of rolling over. Typically, we do not make sure the weight of the passengers is evenly distributed before we get on the roadway, and because of the weight imbalance, if a driver over corrects, he will put the vehicle into a rollover yaw position. What is funny about SUVs and vans, is that drivers have a false sense of protection and safety, which can make them less cautious when driving.

Another reason rollovers happen is driver behavior and driver location. For instance, government studies report that speed is a factor in approximately 40% of fatal rollover crashes. Additionally, alcohol is usually involved in rollover crashes because drivers whose mental and physical reactions are slowed are more likely to rollover their cars or trucks.

What to do if you were injured in a rollover accident

If you or a loved one were injured in an Indiana rollover accident, you may be able to receive compensation for your injuries. To help determine whether you may be able to file a claim against the other driver, contact an experienced Michigan City Indiana Personal Injury Lawyer at (219) 874-4878 to discuss the specific facts and circumstances of your claim.