Skip to navigation
Counsel That You Can Trust & Depend On

DO WE FIND EQUITY IN THE COURTHOUSE?

If you're in Michigan City, Indiana and you stand on Washington Street and look up at the Courthouse façade you will see this inscribed: 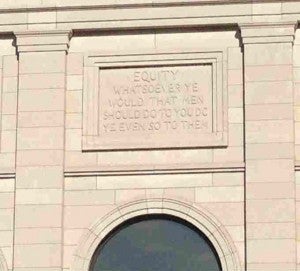 Equity – whatsoever ye would that men should do to you, do ye even so to them.

You may have some questions about Where does this statement come from? What does it mean? And why is it on the façade of the Courthouse?

Here are my responses to these questions:

Where does this statement come from? The Bible. If you turn to Matthew 7: 12 in the King James Version – you will read:

Whatsoever ye would that men should do to you, do ye even so to them; for this is the law and prophets.

King James English is a little archaic but my friends, this is the “Golden Rule” Matthew chapters 5 through 7 is Christ's sermon on the mount. We also read a more common version of the “Golden Rule” in Luke 6:31 “do unto others as you would have them do unto you.”

Aside from the Golden Rule – we see the term “equity” – what is equity? The dictionary defines equity as “the quality of being fair and impartial.” In practice, equity is the impartial distribution of justice, or the doing that to another which the laws of God and man, and of reason, give him a right to claim. It is the treating of a person according to justice and reason.

Why is this biblical verse on the side of the LaPorte Superior Courts building?

This week as I write this post, there is a murder trial going on in this building. A man is dead and the State is seeking justice and punishment for the alleged offender. What happens will be up to the members of our community who are giving their time and energy to hear the evidence and come to a decision regarding the young man's future. Remember, the judicial system is the third branch of government and it is part of the checks and balances given to use by the framers of the US and Indiana Constitutions, and its doors are open to all of us when we need it.

So, the next time you are traveling down Washington Street and you see the Courthouse to your left, know that Justice is served in those walls.