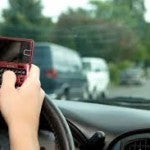 In a recent edition of The News Dispatch, Sgt. Yagelski of the MCPD comments on Indiana's anti-texting law. For most people, texting has become a way of life.  I know that the best way for me to communicate with my adult daughter is by text.  If I leave her a voicemail it may take a week or two for her to respond, but I'll get a response to a text message within short order. I'm guilty – I have sent a text message while driving even though I use Siri – she makes a lot of mistakes and forces me to actually look at the screen to make corrections.

Michigan City Police officers are noticing more and more people texting and driving on a regular basis. With the busy shopping season and fast-approaching dangerous driving weather upon us, they are warning citizens of not only the dangers but also the fact that citations will be issued.

According to the article, in 2011, at least 23 percent of auto collisions involved cell phones, equaling 1.3 million crashes. At any given daylight moment across America, about 660,000 drivers are using cell phones or manipulating electronic devices while driving.

In Indiana, the distracted driving law is a primary law, which means law enforcement can pull you over for texting or using your email – they do not need to have another violation.  This is not true in other states.  For instance, I also practice in Florida and Florida's anti-texting law became effective in October 2013, requires another violation in addition to texting or emailing before a driver can be stopped.

In Indiana, the violation will cost between $150 and $450 if you are caught in a construction zone.  In Florida, the ticket is $30 bucks for the first offense.  Indiana is definitely taking texting and driving seriously.

I can tell you that cell phone and media player use is a common in car accident cases.  Most folks who look down at a text, email or song selection on a media player will have their eyes off of the road for about 5 seconds. A lot can happen in 5 seconds.  Traffic can stop in front of you, a child riding a bike can be crossing the road, or you drift to the right or the left.

In car accident lawsuits it is common place for both parties to get cell phone and data plan records in an effort to see if the driver was on the phone or texting at or near the time of the crash.  Jurors will hold texting and driving against any driver involved in a car accident so texting and driving may not only cost you a fine – it could cost you thousands of dollars in compensation.