Heel Fracture After An Indiana Accident

A guy came into the office on crutches. I asked him what happened. He told me that he fell through an attic while working on a customer's roof. He was taken to the emergency room at St. Anthony Hospital. X-rays showed that his heel was broken in two pieces. An orthopedic surgeon was called in and he told the guy that he had a comminuted calcaneal fracture.  The doctor is going to put him in a cast for six to eight and he is supposed to be non-weight bearing.

The client had three questions:

Did he have a case?

In order to determine if the client had a case, we would have to determine if the owner was negligent. A property owner has a duty to keep their property in a reasonably safe condition, and the owner should warn the guy of any concealed defects. If the area where he was walking was damaged, in disrepair or otherwise damaged, the owner of the property may be responsible for the guy's injuries. 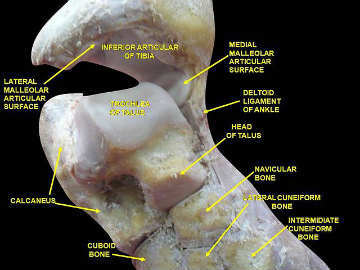 I have a number of concerns for folks who experience calcaneal fractures. The main complications that I worry about and have to identify are:

Over the years, I have followed a number of folks with this injury and most them had chronic problems because of the amount of weight that goes through the heel when standing and walking.

If we are able to show that the property owner was negligent, under the law, the following damages are available:

The potential  consequences have to be identified and accounted for before settling an injury case with a calcaneal fracture, and if the the client has a permanent issue in the area, this needs to be documented and supported by medical evidence before an insurance company or jury will consider future expenses and future pain and suffering damages.   Photo attribution: By Anatomist90 – Own work, CC BY-SA 3.0, https://commons.wikimedia.org/w/index.php?curid=25428906